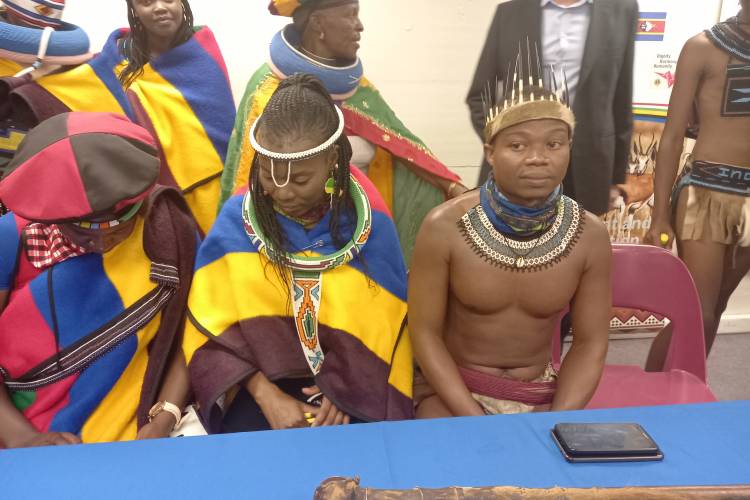 Kwamhlanga -The Boulders Shopping Centre mall manager who was suspended for attempting to block a man from shopping while wearing traditional Ndebele garb, has drawn the ridicule of Twitter after he claimed to own the mall in the viral video.

Redefine Properties announced they had suspended the centre manager on Thursday and expressed regret in the manner that the employee had interacted with Ndebele activist Thando Mahlangu, who was shopping in the mall wearing his traditional Ndebele wears.

After Flare fm news heard the news of the centre manager’s suspension, scores of people on Twitter poked fun at the suspended manager, who had claimed ownership of the mall during the viral video in which he was animated, telling Mahlangu he would not allow him to shop in traditional dress.

He had also told the customer that the right of admission was reserved and he asked him to leave.

“Do you hear me? Let’s cut the story short, you’ve got a right of admission. I don’t condone this in my mall, ngicela uphume ke (please leave),” said the centre manager.

The clash continued until the centre manager told Clicks staff not to serve Mahlangu.

“I’m not going to argue with you, don’t sell them whatever they want to buy, they must just leave,” said the manager.

The incident happened in the shopping aisles at a Clicks store, and which the beauty and health store quickly distanced itself from the incident and reported the centre manager to the owners of the centre, Redefine Properties.

Clicks said an on-duty manager de-escalated the issue, asked the centre manager to leave with mall security and allowed Mahlangu to carry on with his shopping.

“Clicks Midrand Boulders did not ask a customer dressed in Ndebele traditional wear to leave the Clicks store. The centre manager of Boulders, accompanied by Boulders Centre security, entered the Clicks store and demanded that the customer leave.

“The Clicks store manager intervened and asked the centre manager to leave. The customer was allowed to continue shopping. We are extremely embarrassed by the centre manager’s behaviour and will be putting in a formal complaint,” said Clicks.

In a swift turn of events, by Thursday afternoon it was the centre manager who was being asked to leave, after Redefine Properties said they had placed him on suspension pending an internal investigation of the incident.

They also expressed regret and said their chief executive, Andrew Kronig, wanted to apologise to Mahlangu in person for the embarrassing ordeal.

“The events that unfolded at the Boulders Shopping Centre yesterday are most regrettable. It is imperative that we, as Redefine, take this opportunity to reiterate every South African’s right to freedom of conscience, religion, thought and belief as protected in section 15 of the Constitution.

“In addition, given South Africa’s painful, racial and culturally oppressive past, we also align ourselves with the provisions of section 31 of the Constitution where the rights belonging to a cultural and religious group may not be denied,” he said.

Kronig described their employees actions as “degrading, undignified and devoid of human dignity”.
On social media, the centre manager was resoundingly trolled for claiming it was his mall and users wondered how he had been suspended from his own mall.

One Twitter user said the mall manager, Mr Maponyane, was reminded by his suspension that he was still a Maponyane, and not a Maponya – in reference to property mogul Richard Maponya who built the Maponya Mall in Soweto.
Clicks sets record straight after mall manager chases customer away for wearing traditional regalia

Redefine CEO wants to apologise ‘in person’ to Thando Mahlangu

Redefine CEO wants to apologise ‘in person’ to Thando Mahlangu for Ndebele dress mall incident’Please leave!’ Centre manager suspended after trying to kick out Ndebele dressed man in viral video Ndebele viral video: South Africans not impressed with Boulders Centre apologyClicks sets record straight after mall manager chases customer away for wearing traditional regalia 7 , the community of KwaNdebele has since been protesting for the incedent demanding answers from the mall management on Friday 25 March 2021 , the march was organized by Skhimba Masango and traditional leaders