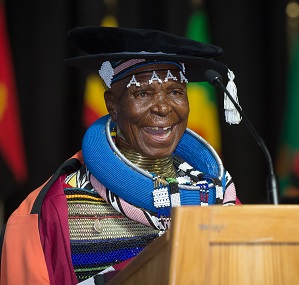 Esther Mahlangu was born on November 11th, 1935 in Middleburg e e Botjhabelo, Mpumalanga, South Africa. She is of the South Ndebele heritage. She was the first of nine children: three girls and six boys. She is famously known for her specialty in doing traditional Ndebele paintings and beadwork, a skill which is passed down through generations in the community, and she learned it from her mother and grandmother. Then, they used colored clay to decorate their walls, but in the 1940s, the use of modern paints was introduced in the community, and the Ndebele art also evolved.

Esther age is currently 85. She will be turning 86 in November 2021, and even at her age, she still enjoys painting. Her star sign is Scorpio.

Esther got married and had three sons, but unfortunately, she lost her husband and two of her sons , the olders sons name was Stokana

Traditionally, girls learned the Ndebele art, which they used to paint their first house when they get married. The in-laws of the wife would come and check if the lines were straight, and if they were, then it would mean that she would be a good wife and would be able to take care of her family.

The great artist draws freehand without first measuring, sketching, or using high contrast vinyl paints. Being the first Ndebele to transfer the Ndebele art from walls to canvases, thus promoting the art form, Esther has dedicated herself to preserving the culture. From 1980 to 1991, Mahlangu worked at the Botshabelo Village, an open-air museum for the Ndebele culture.

Ether Nostokana Mahlangu art first gained international attention in 1986 when some French researchers, who were traveling the world and looking for traditional crafts, saw the paintings in her house. She then went to Paris for two months in 1989 to create murals for the exhibition, Magiciens de la Terre (Magicians of the World).

In 1991, Esther used a Ndebele pattern to colour a BMW 525i, becoming the twelfth artist and the first woman to take part in the BMW artwork just as other BMW art creators before her like, Andy Warhol, Frank Stella, and David Hockney. Esther Mahlangu BMW was the first African Art Car that was painted with the typical motifs of the Ndebele tribe. The car was later exhibited in Washington DC in the National Museum of Women in the Arts in 1997. Also, in 2017, it was exhibited at the British Museum in London.

Mahlangu has started her own art school in the back yard of her home in Mpumalanga to preserve her cultural heritage. She funds the school herself with the money she earns from the sales of her artworks, which ranges from $3,000-$30,000 in addition to mural commissions. There, students are taught how to draw straight lines using freehand and mix pigments. They also learn beadwork, and when she is not traveling, she mentors upcoming artists in South Africa. She also created six paintings inspired by Nelson Mandela in 2004, which were first exhibited at The Melrose Gallery in March 2017.

Esther Mahlangu has also done her artwork on sneakers for great labels such as Nike.

Marking her heritage, the art prowess always dresses in traditional African clothes with the Ndebele pattern decorated with golden rings and beads on her neck, arm, and legs.

Esther Mahlangu achievements are a lot in her career. Her awards include the Mpumalanga Arts and Culture Award, an award from the French Ministry of culture, the South African government’s Order of Ikhamanga, two Radio Ndebele awards in 1988 and 2001, the Nassau County Commendation, and the Incorporated Village Hempstead citation.

On April 9th, 2018, Dr Esther Mahlangu was conferred with a doctorate by the University of Johannesburg.

Dr. Esther Mahlangu net worth is currently unknown, but she has earned a lot from her art and funds, which she has used to start her own art school.

‘To paint is in my heart and in my blood’ are the words Esther Mahlangu of one of the greatest African artists to exist. She is an inspiration to all of us to follow our talents.